President Donald Trump could sign the tax bill as early as Wednesday.

Congressional Republicans were on the verge of sending a historic tax bill to President Donald Trump, after the Senate passed a massive overhaul of the tax code early Wednesday and the House was expected to approve it later in the day.

The Senate passed the bill 51-48 after amending the measure the House passed Tuesday. Sen. John McCain, an Arizona Republican, was absent for health reasons.

In a surprise development, the Senate’s parliamentarian found minor provisions that broke budget rules, forcing lawmakers to strip them out and requiring the House to vote again. House leaders have scheduled a new tax vote for Wednesday morning.

Applauding the passage of the bill in the Senate, Trump said in a tweet that if approval goes ahead in the House, a news conference at the White House is planned for around 1 p.m. Eastern.

The United States Senate just passed the biggest in history Tax Cut and Reform Bill. Terrible Individual Mandate (ObamaCare)Repealed. Goes to the House tomorrow morning for final vote. If approved, there will be a News Conference at The White House at approximately 1:00 P.M.

No Democrats voted for the bill, which, among its many features, cuts the corporate tax rate to 21% from 35%; temporarily lowers individual rates; and doubles the child tax credit to $2,000.

The House’s vote Tuesday was 227-203, with a handful of Republicans voting against the bill in protest of a $10,000 cap on state and local tax deductions.

U.S. equities were poised to make modest gains at the start of trading on Wednesday, with Dow Jones Industrial Average futures YMH8, +0.35%  up around 0.2%. Stocks took a breather Tuesday after hitting records ahead of the House and Senate votes.

Trump and Republicans campaigned on tax cuts and have touted the bill’s potential impact on USs’ pocketbooks. In a report released Monday, the Washington-based Tax Policy Center said the final version of the GOP bill would benefit most US taxpayers, at least until key provisions sunset. But those gains fall mostly to the wealthy.

The bill is estimated to add nearly $1.5 trillion to deficits over 10 years.

The provisions that were found to violate what’s known as the Byrd Rule were allowing families to use 529 plans for home-schooling expenses; criteria used to decide whether private university endowments are subject to excise taxes; and the title of the bill itself. The Senate struck the provisions.

Republicans say the measure will boost the economy and lead to job creation. Democrats have slammed the bill as a giveaway to the wealthy and corporations. A CNN poll found there is a widespread perception it will benefit the wealthy more than the middle class.

“Today, this is about how much better things can be,” said House Speaker Paul Ryan, a Wisconsin Republican. “This is about more jobs, fairer taxes. It is about bigger paychecks,” said Ryan, whose floor speech was briefly interrupted by shouts from protesters watching from the House gallery.

Senate Minority Leader Charles Schumer, a New York Democrat, cited polling on the bill and urged its defeat. “Vote no. Otherwise, I believe the entire Republican Party, and each of you, will come to rue this day,” he said.

The bill nearly doubles the standard deduction but also cuts the amount of mortgage interest taxpayers may deduct. Democrats have blasted the bill’s increasing the estate-tax exemption, which is doubled to $11 million.

In the House, Republicans lost 12 members on the vote amid anger over limiting state and local tax deductions. The bill allows deducting $10,000 in state and local property, sales or income taxes from federal taxes. Lawmakers, including Republicans, from high-tax states including New York and New Jersey said the cap hurts their constituents.

The bill would repeal the corporate alternative minimum tax and also set up a so-called territorial tax system for multinational corporations. 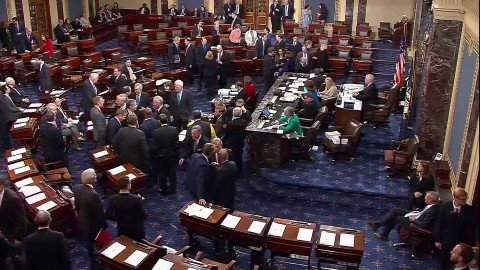 Enactment of the tax bill would represent a political victory for Republicans and Trump after failing earlier this year to repeal and replace Obamacare. Both parties will attempt to capitalize on what they say are the strengths and weaknesses of the bill heading into next year’s midterm elections, which could prove punishing for Republicans. Voters increasingly want Democrats to control Congress after the 2018 elections, according to a new Wall Street Journal/NBC News poll.